It's Okay, I'm An Introvert! 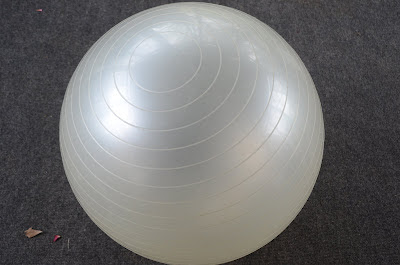 I had arrived fashionably late. Only about 5 minutes, 10 minutes tops after starting time. I thought I would silently slip through the back door unnoticed. I climbed the steps and into the cold, yellow hallway, my heart picking up a faster beat. I was trying to be an adult about it, act nonchalant.

I entered the all-purpose room staring down at the green high school tiles. Maybe they won't see me?

They were standing in a wide circle that filled the room. A nice woman with a ponytail stepped aside, leaving a space just for me. She leans over and whispers in my ear directions to the ice breaker game they are playing. I hardly heard a word because my heart was beating too loudly and the voice in my head was thinking of ways of escape. I crossed my arms over my chest in defiance. It would be awhile until it would be my turn, I thought.

The gray ball came bouncing my way, bumping up against my feet. My arms remained clenched in safety as my head darted to the women on either side of me. Surely they would rescue the ball from my feet and take their turn. All eyes looking at me I heard the short, gray haired one tell me to pick it up, it was my turn after all. With reluctance I reached down, my mind searching for bits of the directions ponytail lady had shared with me. "I'm new here" is all I could say as I frantically met expectant eyes. Short, gray haired lady started giving me the answers and all I could say was "what she just said" as my face, turning the color of her hot pink t-shirt, began to betray me. I said what I needed to say and quickly passed the ball back to the center of the circle.

At once I plopped myself and my shiny gray exercise ball in the back corner of the room perhaps hoping to be left alone, the only person I knew in the room the smiley, energetic instructor. He carefully showed us how to maneuver on the ball explaining how you could sit as far forward on the ball as you wanted and it would not slip out from underneath you. He bounced in that position for added emphasis.

"It will not slip out from underneath you. I guarantee it." Famous last words. They no sooner left his lips when my ball "of terror" flew out from beneath me and shot into the wall behind me. My arms and legs flailing I landed with a thump on the cold, green floor. Yes, everyone noticed. They shrieked in terror, "Are you alright!?!?!"

Um, yes. I just fell on my bum in front of a whole room of strangers. I was just fine or so I wanted everyone to think.

I scrambled to collect my new enemy, the ball, and sat on it as if nothing had even happened. I was eager for everyone to go back about their business and stop looking at me. Then the voices started back in on me again. They taunted and teased me. I shouldn't have come. If only I had been later I would have missed that stupid game. If I had only been early then I would have had some time to adjust and hear the directions. How could he not know that the ball was going to do that? He had assured us it wouldn't do that but it did. I shouldn't have listened to him. If I left now do you think anyone would notice?

I persevered on, my outward appearance remaining fully in charge and perfectly fine while my inner self volleyed between fight or flight. It's been over 30 years of this. Wishing I could flow, be confident, not care. It seems so much easier for other people. Even though I often want to run I have perfected the art of fight. Fighting through the feelings and putting on a brave front.

That exercise class just exacerbated the fact that I am, at heart, an introvert. For the better part of my life I have felt like my silence and discomfort was not okay. I have blamed that part of me for missed relationships, poor first impressions ("why are you so shy?"), and a multitude of other things.

As I have grown and matured I am beginning to understand that part of me. And I have begun to see that there are "closet" introverts all around me and I never knew it.

You know that lady at church that never says hello? It's not because she doesn't like you, it's because she isn't good at initiating conversations with someone she doesn't know. There are countless examples like this I could share. Sometimes I think we are all so insecure that we assume other people are just cold, unfriendly, or anti-social with us because there is something wrong with us or them. Or other people see our silence as a sign that we don't want to be friends. Maybe that clique of women over there are stuck to each other like glue because they are closet introverts that have found each other. There is comfort in sticking together. There is safety in good friendships that have moved beyond small talk. Introverts can be so complicated!

There are varying levels of introversion. Some struggle more then others. My son is an introvert just like me and I catch myself sometimes pushing him to be more extroverted. Maybe it's because I know how hard it is to be introverted in an extroverted world. Maybe I know too well the internal feelings that keep an introvert from wanting to take risks and reach out to others. I read this guest blog post that talks about being an introvert and I could truly appreciate its perspective. God creates each and every one of us with a purpose. The world could not exist well if we were all extroverts. It was not part of the plan. Introverts have gifts and talents that have a place in this world. Maybe instead of trying so hard to be something we're not, we embrace who we were made to be and seek to find ways God can use us just as we are.

The next time that exercise ball class met I brought a friend with me. A fellow introvert. And we laughed together as we both braced for that night's ice breaker game. And we celebrated when the ice breaker question was "where were you in 1971?" and we could both answer "we weren't born yet". We were "safe" for another week.

Linking up at Thought Provoking Thursdays and Write It, Girl!

Email ThisBlogThis!Share to TwitterShare to FacebookShare to Pinterest
Labels: friends, grace, perspective, worth

I laughed, I cried, I can relate, thanks for your honest heart!

Thank you, Jane! It's nice to know someone can relate. Even if it's at my expense. Ha!

Oh girl, I fell once on campus at IU on an ice patch in front of the dining hall. Not gracefully :)

Love your story! I find that lots of writers and bloggers are introverts! I think there is a connection to that and good writing!

Blessings friend. So glad you are a Write It, Girl!

Okay, that story didn't happen to me, but it could have. I am one of the severe introverted, shy, awkward, incredibly insecure kind of people...and I keep asking myself why on earth am I going to a conference full of 420 outgoing, beautiful, successful women, most of whom already have their set circle of friends? It's a scary thought. I know God wants me there, and I can only pray that at least one person will reach out in kindness, because that's usually all it takes to help build my confidence.

Crystal: Introverts internalize everything. We assume everyone is more outgoing then us and if we get a "cold shoulder" that it has to do with us. There are probably more introverts out there then you can imagine. You are definitely not alone!

You can do this!