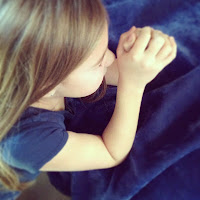 Dear God, please be with my Dad at work tomorrow, and me at school, and my Mom, well, with whatever she does…

I admit, I did slightly paraphrase (and over-emphasize certain words in) that prayer, but that's what I heard.

Whatever she does. Do they honestly not know?

I'm a stay-at-home Mom, but to my kids and to the world around me, does that really mean anything?

It was a messy conversation as we hashed out the implications of that prayer. I felt hurt, under-valued. I know my child didn't mean it like that. In fact, it was described later that I do so much and that was why it was worded that way. It was just an open-ended…whatever she does tomorrow.

Perhaps my emphasis was on the wrong word, but it revealed this tiny chink in my Momma armor. A place of vulnerability that my child's words found like a dart to a bullseye. And as we talked, the tears started to well and fall down my face to the confusion of my family.

I want to be valued. And if I may be blunt, society says stay at home Moms are just not.

I worked at a video production company when I became pregnant with my first child. I worked until the last month of my pregnancy. There was no resignation. No termination of employment. I just left it with a "we'll see what happens."

Once my maternity leave ended, I tried for a while to be Superwoman, being caregiver to my young son and working from home. But as flexible as my employer was, actually being in the office was necessary a lot of the time and after several attempts dragging my son along with me, I knew it wasn't going to work.

My husband was always in favor of me leaving my job and staying home full time. It was me, I guess, who had been the hold out. I liked what I did, for the most part, and working was all I had known since graduating college.

It became clear, however, that being a Mom was what my heart was truly being called to do. So without further hesitation, I quit my job to work at home as a Mom and homemaker.

It's been ten years since I worked in an office. And I have raised two beautiful children who are now in elementary school. My responsibilities have changed, along with my availability.

What once had been an admirable profession, caring for a baby and toddler all day, had become empty and meaningless in the world's eyes.

And I had to come to grips with that.

To be continued…
Posted by Unknown

I'm looking forward to the rest! So, so true, all that you've said:)

Thank you, Mandy! Check back on Wednesday for Part 2!