When a Snake Blocks Your Path (Letting Go of Control)

It was early June and a rare get-away opportunity found us exploring the Pocono Mountains of Pennsylvania.

I remember the early summer day well. A thick forest of trees littered with rocks and lush mountain laurels blooming along a lake trail. The warm sun sneaked and danced through the cracks left by branches and leaves. And the air held the coolness of a lingering spring.

We walked from the trailhead not entirely sure what adventure awaited us. According to the map, our chosen course would ring-a-round a mountain lake, a fairly easy hike to navigate with our small children. 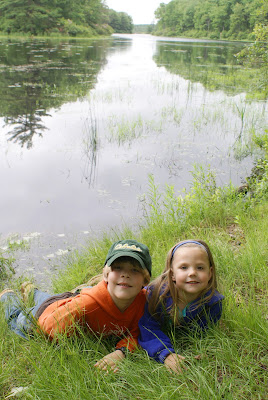 Not ten minutes into our walk and the sound of rushing water teased our steps. We approached a wide tributary cluttered with branches and small rocks. A recent rain had invigorated the waterway and made it appear nearly impassable.

Determined to cross, my husband scoured the surrounding grasses for anything that could act as a bridge or a way to sure up the branches that already reached across to the other side.

All of his pushing and pulling and building and fixing stirred up a snake who had found a small dry patch on one of the logs. The snake sealed my fate. I would not cross. 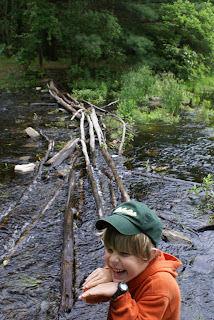 I hemmed and hawed.

I made excuses — the children, my camera, wearing the wrong footwear, the deadly snake that was waiting to eat us if we attempted to cross (come to find out it was harmless).

"Don't be a wuss. The kids are fine. I'll carry them and the camera. No problem," he reassured.

But the angry gave way to tears and it all started to make sense.

I was always in control, very competitive, and self-sufficient.

And I was no wuss.

But could it all just be a facade?

Being a control freak is tiresome. It's nearly impossible to control every aspect of your life and not be exhausted. And when you're not controlling you worry — about the things beyond your control.

It was like a dam broke that day. As the water rushed and tumbled over the logs and rocks that threatened to stop its momentum, I realized that I was done.

I don't want to rearrange the branches to clear the path.

I don't want to be the strong, independent one who sucks it up and barrels through because I think that's what I'm supposed to do.

And I don't think God wants me to do that either.

For far too long I have tried to navigate this life on my own — thinking I was controlling my fate.

But what choices had I made that were not meant for me?

Which paths did I take because it led to what I thought I wanted?

And how often did the perceived "shortcuts" take me the long way back to God?

As I explained my conflict to my confused, but loving husband we agreed to change course. We turned around and followed the trail down the other side of the lake. We found a frog and twelve more snakes (lucky us).

And I relished in the peace of surrender, acknowledging how much I need God and how weak I really am.

Asking for help and submitting to God's leading is not always easy. But there is an awesome amount of freedom that comes from letting go and letting God be your trail guide. 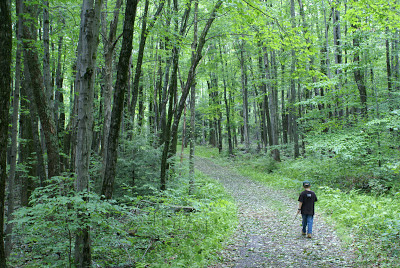 Christy,
So often in my own selfishness I find myself pressing MY will and desires upon you. Yet not encouraging possibilities of God's will in our lives. Please forgive my utter self focus. I love you. I so desire that our marriage be a place of adventure and pressing our comfort zones. However, I don't want it to be at the cost of our your safety and security. Thank you for your love and patience as I study you and learn to love you well. May God bless us as we journey together down the path to healing. A path that can only come through showing our scars to hurting people and telling them about Jesus whom is our Great Healer.