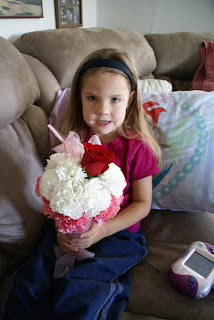 Today was the BIG day! Ellie had her tonsils and adenoids out. It was NOT a typical Wednesday. We arrived at the hospital at 7am and the surgery (slightly delayed) began at 8:45am.

Ellie was a trooper. We laughed as we watched her skipping down the hospital hallway on her way to surgery. She was fine until the anesthesiologist entered the room (I hope he doesn't have that effect on everyone - Ha!). But a drink of "silly juice" and 20 minutes later she was completely relaxed and "unaware". It took about an hour before the surgeon came out to talk to us. He said she did a great job. Her tonsils were "huge" and they had to take the adenoids out, as well. It was definitely necessary to put her through all of this.

How did Mom do? I did well (or maybe better then I expected). My biggest moment of dread happened before bed the night before. I struggled when she started to freak out with the anesthesiologist, but once she started to relax (again, thanks to the silly juice) it was much easier on me.

Found it interesting how my hardest times are seeing her upset and Adam's hardest moments have to do with protecting or "standing up" for her. As tears welled up in my eyes I heard the voice saying "be strong for her, Christy", but it must just be the way I'm wired. I can't help but show my emotions with tears. Considering how I could have reacted, however, I feel like I handled myself very well in that regard.

How's the patient? Returning home she was so hopped up on meds that she seemed to be feeling great. Aside from throwing up several times because of the blood in her stomach, you wouldn't have known anything had happened, initially. I struggled to convice her to rest and she was so hungry she wanted to eat whatever moved. Decided to give her "real" food while she was able to eat it (knowing it wouldn't last once the pain started to hit). So she ate (popsicle, half a piece of bread with jelly on it, and a few nibbles from our lunch).

Finally got her to sleep around 4pm, but by that time she had started to swell. Her poor cheeks are poofy and I think her tongue is swollen, as well. Her nap was very noisy between the snoring & the mucus noises rattling around in there. By dinnertime, the pain of swallowing started to kick in and although she wanted to have soup for dinner, she struggled with it.

We decided to give her the Tylenol with codeine a little early and within 20 minutes of taking it, she has eaten a bowl of chicken soup (with noodles) and another popsicle. She's been wearing an ice pack off and on, but the best thing I did was crush up some ice & let her chomp on it with her water.

Not sure how sleeping will go tonight.

Thanks to everyone for praying for her, for us. We really did have an uneventful, mostly calm experience. The doctor and nurses were really wonderful to her. I know that this is just the beginning of a challenging week. We would appreciate your continued prayers as she deals with the pain and her body heals. Thankful too, to live in a country where my daughter can have this procedure and live a healthier life. We really are fortunate. It's a shame we are often too busy to remember that. God met all of us at our needs today, with peace and comfort, strength and courage…and for that we are so thankful!