He was out of control! And in an instant, typical met defining as he crashed into the door head first. It was a miracle it wasn't worse, but he would be left with a small reminder.

Let me back up a little bit.

It had been the spring day we had anticipated all winter long — when heavy jackets are replaced by t-shirts and your lungs exhale the stale dreary to breathe in the warmth of a springtime breeze.

Around dinnertime we received an invitation to meet friends to ride bicycles. After dusting off and pumping up they rode their bikes to the school at the end of our street.

As parents chatted, the children swerved and sped in circles around the empty parking lot. The oldest, my son, peddled swiftly up the hilly sidewalk just to coast down the incline again and again and again.

It was a carefree hour until —

Maybe the repetition had made him a little too comfortable on his bike seat. Or perhaps he actually believed he was that daredevil BMX racer he'd watched on the Xgames.

Either way, something inspired him to lift his size fives off the peddles that day to ride free and fast down that concrete hill.

By the time his feet found the peddles again it was too late. He was out of control! And in an instant, typical met defining as he crashed, head first, into the plexiglass double door. 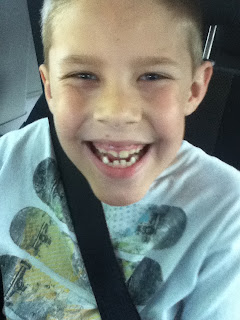 It was a miracle it wasn't worse, but he would be left with a small reminder.

His face rammed the door, but his permanent front tooth absorbed all of the impact. Broken, half of his tooth lay on the sidewalk to his father's dismay.

His tooth is whole now, but you can see where the two jagged pieces were glued back together.

I hate that it was his permanent tooth. That there isn't a way to put it back the way it was. It may cause him problems later on. It's already fallen off once.

But at the end of the day, this story, and many others I could share, are a reminder to me — of how little I control and how much I have to cherish. And how in the midst of a bicycle playdate a child's life, or at the very least his tooth, can be impacted forever.


"You never fully appreciate what you had until you don't have it anymore." ~Glenn Beck

May we be more intentional about cherishing the moments that we have, embracing the reality that every moment is a gift and could change in an instant.

This is a post in a series called, 31 days of Intentional Living. You can find all the posts in this series here, updated each day in October. Category: Inspirational & Faith

Linking up with the Soli Deo Gloria party today. Check it out!

hello...visiting from SDG...thank you for weaving so beautiful the "typical into the defining" and reminding me to cherish every moment and admit that I have little control over most things!

Those boys! My son broke his tooth biking, too. I just wish I had thought to take a before his dentist appointment picture!

Thanks for visiting! Breaking teeth is the worst! Especially when it's a permanent one. Wish I could wiggle my nose and change the outcome sometimes. But thankful that was the worst thing that happened to him that day. ~Christy